Root Capital, an impact finance organisation, has given Kuapa Kokoo Co-operative Cocoa Farmers and Marketing Union Limited (KKFU) US$325,000 to aid its effort to fight COVID-19 among cocoa farmers.

The first tranche of the money, which has been released according to KKFU, has enabled the purchases and distribution of soaps, handwashing stations, face masks, health education materials, among others.

These relief items are already being distributed to the 100,000-cocoa farmer-member.

The will make the handwashing stations available to the broader community of approximately two million people to minimize the spread of COVID-19. Continue reading…

The management of Kuapa Kokoo Co-operative Cocoa Farmers and Marketing Union Limited (KKFU) wishes to condemn claims made by the New Crusading Guide newspaper linking the farmer union to how cocoa farmers have been cheated by some licensed buying companies.

The New Crusading Guide made unfounded allegations based on a documentary aired by Joy FM about “missing kilos” in the cocoa sector and attempted to connect the documentary to a case that is still pending in court involving a former Kuapa Kokoo district manager who embezzled funds meant to purchase cocoa. Management, therefore wishes to state categorically that the publication is speculative and baseless.

Our investigation has revealed that some disgruntled former members of the union are behind the publication by The New Crusading Guide newspaper.  We believe that it is mediocre journalism for a recognised media of their ilk to print this concocted information without doing due diligence and cross checking the information with Kuapa Kokoo.

Kuapa Kokoo is a reputable farmer-owned cocoa producing co-operative union that has a proven track record since its establishment in 1993 and the union has worked to support the livelihood of our industrious cocoa farmers.

Our mandate is to deliver sustainable programs geared towards the social, economic, and political empowerment of cocoa farmers, to enhance the participation of women in the decision making process at all levels of operations in the organization, and to encourage environmentally sustainable cocoa production processes.

As a reputable cocoa producing organisation, our focus and purpose is to assist and support our 100,000 plus industrious farmers to earn a decent livelihood. Consequently, we are seriously mobilizing funds for the 2020-2021 cocoa season and we are working with partners preparing projects for diversified farmer livelihood.

The leadership of the organization wishes to reiterate that its core values, which are encapsulated in the Co-operative principles, would not be flagged to support anyone’s parochial interest.

Lack of knowledge on the benefits of keeping trees for shade in cocoa farms have resulted in the loss of huge hectares of tropical forests each year. Environmentally friendly practices; one of the major hall marks of Kuapa Kokoo can really boost cocoa production. Farming Systems that promotes sustainable production, environmental protection, avoidance of deforestation, improvement of sustainable soil fertility, prevention and avoidance of child labour and improved livelihood and strategic partnership has brought Kuapa Kokoo this far. It is for these and many other reasons that we see our collaboration with the Cocoa and Forest Initiative (CFI) as a great means to an end; deepening our quest and commitment to good environmental practices and sustainability of humanity at large.

On behalf of the Kuapa Kokoo family (Members, Executive council and management) together with Millennium Promise Alliance (MPA) our Corporate affairs managers, We pledge our unflinching support to CFI and its ideals and therefore call on all other partners who share the vision of forest protection and restoration, sustainable production, improved livelihoods, social and community engagements, to join us in making the world a better place.

We will continue to do our part to protect biodiversity and the environment with trust in dynamic agroforestry systems. We know that our farmers’ lives and the growth of our organization depend on how we protect the environment where we produce the cocoa beans. The time to act and live our words on environmental and sustainable production is now. We call on industry players to support this laudable initiative.

In this Publication, we explained the company’s overall vision and approach to implementing CFI, highlighted the most important measures it is focusing on, and provided concrete examples of activities on the ground.

Prince Charles’ visit to a cocoa farm at Kona in Ashanti

The visiting Prince of Wales, Prince Charles on Sunday paid a working visit to a cocoa farm at Kona in the Sekyere South District of the Ashanti Region as part of his four-day tour in Ghana.

The elated and apparently lost for words Agyen Brefo, the 42-year-old Kona based mixed crop farmer, who had the rare and memorable experience of the visit to his farm by the Prince of Wales was singled out for praise for the sustainable manner in which he produced his crops.

Prince Charles has been a long-time advocate for sustainable farming and used the visit to experience how sustainable cocoa is done in Ghana. 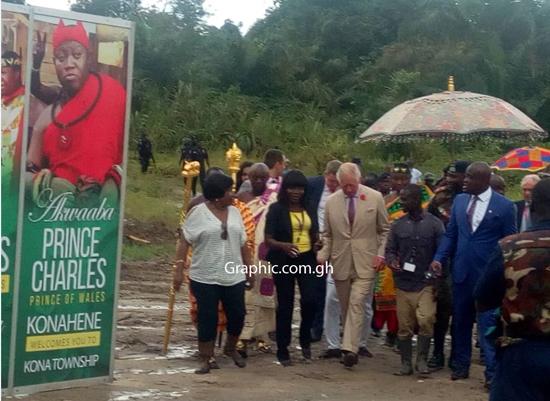 With his main focus on cash crops, Brefo has been farming cocoa in the last seven years on a 27-acre land.

Prince Charles did not make any audible statement to the hearing of the media but nodded his head as he interacted with Brefo.

Prince Charles did not make any policy statement but appeared to have been encouraged and impressed with Brefo’s achievement in seven years.

The Prince of Wales and the Duchess of Cornwall will end their working visit to Ghana on Tuesday.

Agyen Brefo is one of the over 400,000 farmers who have been benefiting from investments in training in good agronomic practices over the years supported by Kuapa Kokoo. 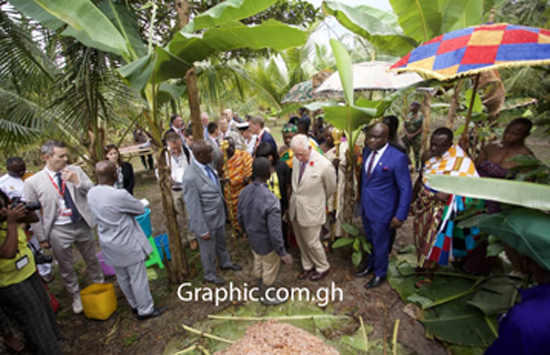 Ghanaian cocoa farmers have appealed to Prince of Wales to use his first-hand experience on Ghana’s cocoa farm to lobby for higher prices of the commodity on the international market.

Prince Charles was on a model cocoa farm at Kona in the Ashanti Region as part of a state visit to Ghana.

Forty-one-year-old Agyen Brefo, a model cocoa farmer, took the monarch through the process of preparing cocoa from the farm to the shed, explaining to him why Ghana’s cocoa is considered the premium quality product.

Agyen started farming seven years ago after spending years in Accra and Israel where he had travelled to seek greener pastures which perhaps, never appeared green for him, after all.

He said he was inspired by Kuapa Kooko Company which natured his ideals and trained him in agribusiness.

With 27 acres of land, he used about two-thirds to cultivate cocoa, using the hybrid while coconuts, sugar cane and other crops occupy the rest together with some poultry.

He has interspersed cocoa with tree species like Odum and Ofram to serve a dual purpose of providing windbreak and timber re-afforestation.

He encouraged other companies to assist the youth to go into farming, especially as regard finance and land acquisition.

He called on the youth who have family lands to start the cocoa business because it was really juicy.

Agyen said he is the luckiest farmer to have hosted Prince Charles on his farm beyond the support he had received from Kuapa kooko Company.

Officer in charge of Extension and Environmental Services at Kuapa Kooko, Frank Okyere, led a team to take Prince Charles through getting cocoa ready for consumption.

The Prince acknowledged it is tedious work.

Britain consumes an estimated 660,900 tonnes of chocolate a year, an average of 11kg per person per year, a figure that equates to about 3 bars a week.

The farmers said they considered the Prince’s visit as one that will encourage them to do more to increases production but pleaded with the Prince to give cocoa prices a serious thought.

More importantly, they want Prince Charles to use what he learnt on the visit to lobby for higher prices for cocoa so farmers can get better rewards for their toil.

Addressing the media at a special soiree held in Kumasi, Madam Ali noted that the pensions is to ensure that members have some livelihoods to live on after being part of the Union and also having participated in the group’s activities for a considerable period of time.

The President, who recently won another four year mandate on behalf of the other executive also disclosed partnerships the company has reached with MTN-Ghana to ensure members have access to mobile phones that is toll free to enable them communicate and attend to pressing needs on the farm.

She also hinted of plans to fast track the period by which Kuapa Kokoo pays bonus to members aside the one government pays to cocoa farmers in the country for the work they do.

‘’We are committed to ensuring our member farmers benefit from every initiative the new executive are coming up with so that we can entice young and enterprising youth into our business and in farming in general’’, Madam Fatima posited. 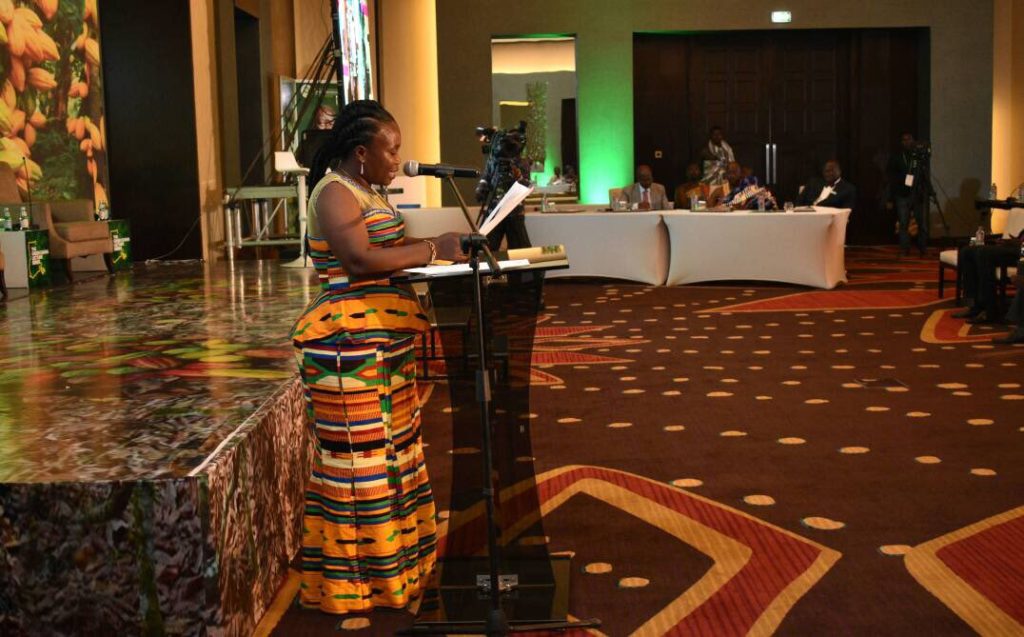 The President hinted of plans by the new executive to intensify efforts in upgrading the knowledge of its union members.

Sensitization forums, field education trips as well as workshops will be periodically organized to ensure farmers apply the right kind of knowledge in their business, Madam Fatima noted.

The Kuapa Kokoo Farmers Union, Madam Fatima mentioned is determined to make its farmers all round in terms of knowledge and effectiveness so that they can produce on a large scale and shore up their yearly yields.

She promised to provide the union’s farmers with improved seedlings and extension services so as to enable the group cultivate on large scale all year round.

‘’I am happy to inform the media that these new executive is determined to apply every mechanism aimed at making the work of our farmers worthwhile as we deal with welfare issues, improved working conditions, pensions and incentive packages for the collective good of our members’’, Madam Fatima intimated.

Hinting about the new direction the Kuapa Kokoo Farmers Company Limited, a licensed buying company with links to Kuapa Kokoo Union, the Managing Director, Samuel Adim Addo, reiterated the commitment of his outfit to make the activities of the company transparent.

He noted the new executive of the Union as well as the company is resolved to fight all corrupt practices bedeviling the association.

With the introduction of technology in the form of Tele-agric and Tele-medicine, the MD noted Kuapa Kokoo is bound to do well in business from now.

In the 2017-2018 large crop season, the MD noted the farmer union was able to achieve 99% of its target as the LBC purchased a total of 59, 096 metric tonnes of cocoa from its farmers across the country.

He noted the partnership with the Millennium Promise Alliance, a health focused organization is yielding dividends as farmers have enough incentives to do well knowing issues about their health and welfare is safe.

This, he noted will afford them the opportunity to sell the message and vision of the union to the public so as to encourage people into farming and into the right association of farmers.

The transparent nature of Kuapa Kokoo and its activities, Chief Nat opined makes it imperative for the media to zoom in on them so that they could be used as a yardstick in measuring the success of co-operative farmer groups in the country.